Much of philosophy is concerned with the good. Good understood in the meta sense; good as both a means and an end. Good as peace. As love. As compassion. As justice. Greek philosophers yearned to describe the eudaimonia, the good life. Not swimming pools and movies stars, but morality and ethical consistency. And much of human history can be understood as clashes between systems of competing goods.

I wrote earlier on the Wikileaks scandal and how, in my limited opinion, it demonstrates the corruption of the Democratic National Committee. The release of emails, when paired with my growing disdain for how the DNC obviously favored one candidate over another, has left me with little to no faith in a party that I grew up favoring. A number of my friends disagreed with me, which is not unusual and one of the reasons I write as much as I do: intelligent conversation and informed disagreements are part of the good. Of the eudaimonia. I conceded a number of points–election fraud/tampering is often charged but rarely proved; Clinton thoroughly trounced Bernie in a process that has served the party for decades; and people are imperfect, so chicanery happens, especially when competition is involved–but what I pushed back against were arguments that were based in accepting the premise of competing goods.

To wit. We all can agree that stealing $10 million from an orhphanage is loathsome. So is stealing their food. One can criticize the latter without reference to the former. What I won’t accept is the idea that stealing food isn’t really that bad because the theft of ten million dollars is so much worse. Is it? It depends on our rubrics. It depends on our perceptions. For a diabetic child whose blood sugar drops and goes into a coma, the chances that the theft is worse are pretty good.

Bandying about ideas as to how Bernie Sanders’ atheism might make a difference to evangelical voters in southern states is not as loathsome as wanting to put a ban on all Muslims entering the country. But I wasn’t writing about the latter yesterday, I was writing about the former. And to me, this is one of the problems with two party politics: any criticism of one system can be interpreted as a damnation of the entire thing, and ipso facto an affirmation of the other system. Decrying that the CFO of the DNC floated an idea about how Bernie was “skating by” on his Jewishness whilst really an atheist seems to me a legitimate position to take. It is not an endorsement of the RNC. It is not a statement that one should not vote for HRC . It also seems pretty fair to point out that the emails are symptomatic of larger issues which are alienating for younger voters, particularly Millennials, with whom Bernie did well (and, no, this is not a post about how Millennials did not show up in large enough numbers during the primaries).  Many Millennials are distrustful of party politics and they have tried to express that; sadly, I feel that often their concerns are met with defensiveness and closed ears. I’ve read about how Bernie wasn’t really a Democrat; that of course the party is going to support Clinton because she has been loyal for so long; that this is how things work and people are getting upset over nothing. It goes again to my point yesterday that party politics are about money and quid pro quo relationships, and it seems any critique of it is passed off as naïveté, sour grapes, or immaturity. I understand the contemporary political reality; I get that there are far worse dangers and concerns, and that most of them are squarely within the GOP. But what I don’t accept is the idea, which has been voiced, that pointing out the deficiencies in the DNC’s approach to this election is somehow inappropriate given what is going on in the GOP. I think we’re adults. I think we can do more than one thing at a time.

As always, I appreciate feedback and comments! 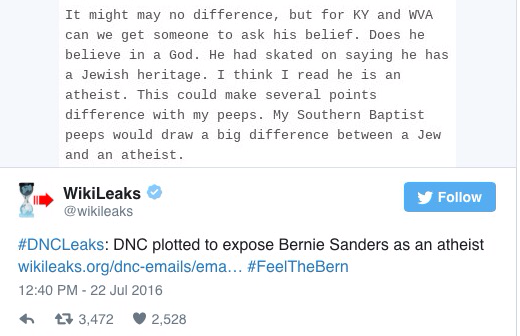 Over the past few hours, various news outlets have been reporting the recent Wikileaks release of nearly 20,000 emails from the Democratic National Committee (DNC) that, among other things, seems to evidence collusion between the Hillary Clinton campaign and the supposedly neutral central party apparatus. This as the presumptive Democratic nominee builds anticipation for her VP pick by first engaging in an unannounced visit to the Pulse nightclub. One feels torn between the absurdity of last night’s RNC closing ceremonies and the anguish many are feeling at the prospect of voting for the other option.

I should start by saying that this is not a Clinton-slamming post; this is about a political system that is so deeply broken, belief and confidence in either of the parties seems impossible. At least, it is for me.

My politics really aren’t a surprise to anyone who knows me; if you’re interested in knowing more click here or here. But definitely not here. I am a registered Democrat only because of state laws; I have no party affiliation and, frankly, I do not think either party can ever again convince me that I can place my trust and confidence in a system that is so thoroughly corrupted. While I absolutely do not think that there is parity between the two candidates–both are deeply flawed, but Trump is an unabashed huckster using my faith tradition for his own despicable advantage to sound cultural and racial dog whistles–I think there is equal corruption of the parties. It seems obvious to me that one side has far more extremists than the other, but I readily admit that I am biased. I like to think I am biased by facts, but most people do. What I am not biased by is ideology.

The Democratic National Committee should be exposed for the disingenuous, Machiavellian cabal that it is, with an infrastructure that is built upon lobbying dollars and incestuous political relationships that tilt the playing field for the established, entrenched players. There is an endless list of things that are odious about Donald Trump, but I’ll give him this: he managed to back down the RNC and secure the nomination. To be sure, Trump needs the Committee and I don’t think they’ll deliver, but Trump came in as an outsider and pissed all over the carpet until the Party called it gold. Bernie Sanders, despite what detractors may say about his policies, was not able to overcome the road blocks the DNC placed in his path. Despite evidence of voter tampering and mounting evidence of illegal maneuvering and collusion during the primaries, the DNC is still trying to convince Xers and Millennials that they have our best interest at heart. That they represent Progressive values. That we can trust them.

Bernie never had a shot. I can’t believe I’m going to say this, but Trump is right that Bernie never had a chance.* I have not read through the entirety of the Wikileaks cache, but it is this email (screen captured above) that bothers me the most. The Chief Financial Office of the DNC, Brad Marshall, casually wondering how pushing a religious angle–pitting Judaism and atheism against one another to capitalize on Evangelical assumptions–could put Sanders at a disadvantage. The idea that using a person’s religious beliefs as a purity test is always something Democrats accuse Republicans of doing. The DNC claims to be above that; that it represents the Party of religious inclusion** where reasonable people can disagree but unite behind the idea that there is strength in diversity.

And this email proves that to be exactly what it is: malarkey.

I can’t believe I’m going to say this, but I plan to take the advice of Ted Cruz and vote my conscience. even amidst boos. I cannot fathom the details right now, but I know enough to be confident that Trump will be a clear and present danger to the country in general and specifically to Muslims, women, GLBT+ persons, immigrants, and anyone else who does not toe the ever changing line he draws. This is not a man who has the disposition, discipline, intelligent, or gravitas to sit in the chair that is currently occupied by someone who has all of those attributes (and more) in abundance. But this is it for me as someone who will put any energy or confidence into the Democratic party.

*I seriously need a shower.

**This article by Mother Jones is absolutely worth the read.