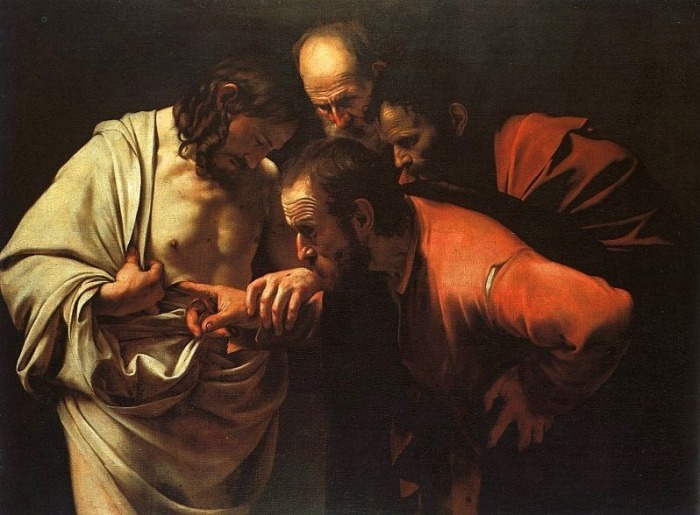 When it was evening on that day, the first day of the week, and the doors of the house where the disciples had met were locked for fear of the Jews, Jesus came and stood among them and said, “Peace be with you.” 20 After he said this, he showed them his hands and his side. Then the disciples rejoiced when they saw the Lord. 21 Jesus said to them again, “Peace be with you. As the Father has sent me, so I send you.”22 When he had said this, he breathed on them and said to them, “Receive the Holy Spirit. 23 If you forgive the sins of any, they are forgiven them; if you retain the sins of any, they are retained.” 24 But Thomas (who was called the Twin), one of the twelve, was not with them when Jesus came. 25 So the other disciples told him, “We have seen the Lord.” But he said to them, “Unless I see the mark of the nails in his hands, and put my finger in the mark of the nails and my hand in his side, I will not believe.” 26 A week later his disciples were again in the house, and Thomas was with them. Although the doors were shut, Jesus came and stood among them and said, “Peace be with you.” 27 Then he said to Thomas, “Put your finger here and see my hands. Reach out your hand and put it in my side. Do not doubt but believe.” 28 Thomas answered him, “My Lord and my God!” 29 Jesus said to him, “Have you believed because you have seen me? Blessed are those who have not seen and yet have come to believe.”  30 Now Jesus did many other signs in the presence of his disciples, which are not written in this book. 31 But these are written so that you may come to believe that Jesus is the Messiah, the Son of God, and that through believing you may have life in his name. (John 20:19-31)

Very few of us come to this narrative unencumbered. It is one of those cases in which the exegesis outstrips the text; poor Thomas has been given a moniker that never appears in the gospel itself: Doubting Thomas. Not Inquisitive Thomas. Not Curious Thomas. Not Thomas the Empiricist. Doubting Thomas. When it comes to doubt, we people of faith’s FB relationship status reads: It’s Complicated.

We really have three pericopes* here. The first runs from vv.19-23 and concerns the authority of the disciples. Filled with fear, they have locked themselves in a room and are attempting to hide from those Jews who see them as a threat to peace and order. We should be very careful not to privilege an antisemitic reading of this text; Jesus was Jewish, his disciples were Jewish, and we Christians declare him to be the Jewish Messiah. The Gospel of John is written relatively late–probably at the end of the first century, beginning of the second–and scholars believe that the fracturing of relationship between the Jewish Jesus followers and the followers of the Pharisees (who are the founders of rabbinical Judaism) was nearly completed. What we see in the Gospel of John is a sibling rivalry. Anywho, notice how Jesus greets everyone present with the phrase, “Peace be with you.” It appears three times in the lectionary selection; in the midst of uncertainty and fear, in the face of the unexpected, Jesus bids peace.

What is also important to note is that Jesus shows the wounds to the disciples; John does not report that they request this action, but Jesus offers it and we can assume that it plays a part in their believing their own eyes. The spiritual message here is clear: Jesus is giving them what they need in order to enter fully into faith. This is confirmed when Jesus bestows upon them the Holy Spirit, which comes with it authority to forgive sins. The language used here is very curious: If you forgive the sins of any, they are forgiven them; if you retain the sins of any, they are retained. It becomes almost hypnotic trying to puzzle out the nuances here. If we forgive the sins of any (person), they are forgiven them. Seems straightforward enough; if you retain the sins of any (person), they are retained. Who is retained? Or what? Do the sins remain with the person? Does the person remain with the one who has not forgiven the sin? Does the sin magically jump from the original offender to the one who will not forgive? I say this not facetiously, but in a true spirit of inquiry. It seems to me that the message is rather clear: forgiving sins is much easier and much more productive than not forgiving them. And, if you don’t forgive, are you committing a sin yourself?

The next section, vv. 24-29, is perhaps one of the most famous from John’s gospel. While Thomas is listed as a disciple in the Synoptics, John gives him the largest speaking role he has in all the gospels. The narrator rightly points out that the name Thomas means Twin; in fact, there is a gospel that bears his name–The Sayings Gospel of Didymos Judas Thomas–or the Gospel of The Twin Judas the Twin. The Gospel of Thomas sets forth the idea that there are numerous twins of Jesus; in fact, salvation is a matter of encountering and entering an enlightened Wisdom, not unlike Buddhist Nirvana, that results in a radical transformation of the “self” and ultimately the world. Elaine Pagels has written a magnificent work, Beyond Belief, that explores the Gospel of Thomas community, and speculates that the Gospel of John’s depiction of Thomas is a coded attack on the Christology and soteriology of the community. I present a similar idea regarding the Gospel of Mark in my upcoming book, Mark as Manifesto. It is an exciting prospect to think that communities “spoke” to one another through their founding documents.

But what is presented in these verses is interesting. Notice that the disciples tell Thomas what they have witnessed. His reaction, of course, is to intimate that seeing is believing and that he has criteria which must be met. There is no report that the disciples castigate or shame him for what he needs. There is no sense from the narrative that what Thomas has done is wrong. But even if that were the case, shouldn’t we notice something? Shouldn’t we notice that Thomas is simply doing the same thing that the other disciples did? At this point, Mary Magdalene is the only person who has seen the resurrected Christ. She went and told the disciples. That should be enough for them. But, it is not. They are in a locked room, hiding away. Jesus makes his presence known in order to bolster their spirits, in order to provide them assurances so that they can enter into the world with faith and strength. Jesus wishes them peace and offers his wounds, the same thing he does for Thomas. Further, we are not told if the disciples put their fingers in Jesus’ wounds, nor is it reported whether Thomas does likewise, despite the propensity for artists over the years to depict it as occurring.

Jesus offers, and Thomas responds with the most powerful faith confession a Christian can utter: “My Lord and my God.” For John, more than any other gospel writer, the connection between Jesus and God is paramount. John depicts Jesus as the Logos, the apriori second person of the Trinity that becomes flesh for the salvation of humankind. It terms of hypostatic union, John is more interested in showing the divine nature of Christ. But Thomas’ utterance declares Jesus Lord, and also affirms that those who see the Son also see the Father (cf. John 5:19, 12:49). The passage is actually an affirmation of faith and of Jesus’ identity.

But then comes a problematic saying. “Have you believed because you have seen me? Blessed are those who have not seen and yet have come to believe.”  Literally thousands of pages have been written about this one line by minds sharper and more astute than my own. Yet, it seems likely to me that this passage is addressing a fundamental truth: faith requires that we believe in the testimony of others. There is an irony that this passage would not have been necessary if the male disciples had simply believed Mary (and that is the subject best left for another blog completely). Thomas may be the last one who gets the offer to put his fingers in the wounds of Christ (which, again, it does not seem that he does), but he is not the last one who will have questions. And, I think it is fair to say, he is not the last one whom God will send signs. True, I would be very skeptical if someone said to me, “Jesus appeared to me last night and allowed me to put my fingers in his wounds.” I would be skeptical for a wide variety of reasons, not the least of which is that I believe God would have been kind enough to allow Jesus to not hear those wounds once his ascended to heaven. But I certainly believe people who tell me that God has moved their hearts or through the process of discernment revealed things to them. I believe that because I think it has happened to me. I believe it has. I know it has?

And there it is. The sticking point. This passage is about doubt as a healthy thing, I think. We should ask questions. Lots of questions. And we should establish for ourselves those details that are non-negotiable. We each of us have a burden of proof that must be met before we extend our trust and faith. That, I think, is how it should be. What God offers instead of exposed wounds, though, is a community of faith in which each of us can go along on our journey. Sometimes we’re locked in a room and need to be told that peace is with us; sometimes we’re out in the world spreading the gospel. But if we take anything away from today’s pericopes, let it be the notion that God will not leave us flapping in the wind. If we open our hearts, if we open our eyes, if we allow God to direct us, we will be given what we need.

Resurrection talk is tough. I’ve never really met a Christian who is neutral on issues of resurrection. Many of my fellow Progressive Christians want to do away with it, or at least talk about it as little as possible. A good number of Evangelical fundamentalists make it the alpha and omega of God’s actions in the life of Jesus Christ. I am somewhere in the middle. I’ve written about the resurrection in past blogs, and on my good days I do affirm the bodily resurrection of Jesus Christ. I still struggle, though. It is not a logical proposition, which is one of the reasons I affirm it. It is like a living koan for me, one that I keep trying to kill yet it comes back to life. Much like the Incarnation. How can God be flesh? How can the dead raise? How can I be when I was not and will not be again?

*(Third pericope: The last two verses are fascinating, and many scholars believe that they are the original ending of the Gospel of John. Here is a solid discussion with a bunch of fellow bible nerds.)